Isn't it always the same with trends and developments that are apparently new? Whilst some people cheer and celebrate a new innovation, others see it as just another old idea dressed up in new clothes. This happens in the communications industry too.

Isn't it always the same with trends and developments that are apparently new? Whilst some people cheer and celebrate a new innovation, others see it as just another old idea dressed up in new clothes. This happens in the communications industry too.

A current example – the discussion surrounding the terms acceptance communications, dialogue communications and participation communications. Ever since “Stuttgart 21” these have been the phrases on everyone's lips in the PR world. Two camps can be recognised among the communicators. Those who see here a completely new branch of communications, with new strategies, methods and measures, and those who understand acceptance in particular to be the goal of every form of communications. As is so often the case, however, the truth lies somewhere between the two, and that is our understanding of the matter too.

Here at Kaltwasser Kommunikation, we group together these three key concepts—acceptance, dialogue and citizen participation—under the area of “citizen communications”. This term too may well be seen as a buzz word. And yet it reflects the aspect that is actually new – the citizen is placed in the focus of communications. The strategies, methods and measures which we employ to enter into dialogue with citizens and involve them in processes, and with which ultimately aim to create acceptance, are not new and can also be found in other areas of communications.

“Citizen communications” has been considered a separate area of our service at Kaltwasser Kommunikation since the year 2014. We give advice to companies, local authorities and institutions with respect to providing information on their projects, entering into dialogue and involving those who are affected. Our goal in doing so – to create an atmosphere of trust and promote acceptance. 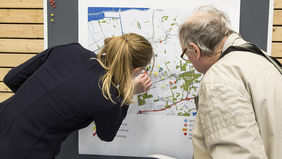 Merger of the agencies Kaltwasser Kommunikation and Fixpunkt
Smart Cities for Smart Citizens
How cities become smart and close to the citizens at the same time
Nürnberg Digital Festival 2022
Digitization is not what happens, but what we make of it together
Sustainability communication – a topic that cannot be avoided!
Time to act
PR-Ranking 2021
Bei Umwelt und Energiewirtschaft auf Platz 2
LinkedIn as an opportunity
Three tips for a successful corporate presence in the business network
Synergetisches Doppel: Corporate und Change-Kommunikation
Strategie trifft Spezialwissen – kommunikative Erfolgsfaktoren für den Wandel
Virtual worlds in citizen participation?
How well does virtual content work in citizen participation processes?
Integration of "silent groups" in citizen communication
Three tips for broader participation